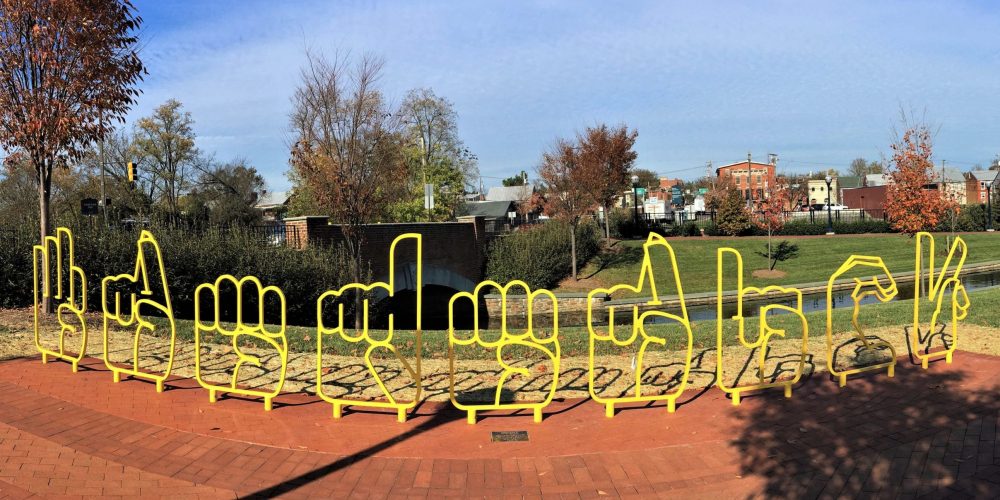 On October 25, 2018 Downtown Frederick Partnership held its first-ever placemaking competition — Pitchcraft — inviting creative people from every background, profession and city to pitch an idea that, if physically implemented in Downtown Frederick, would better connect the people and places of our community. Interested in submitting an idea for the 2019 Pitchcraft? The application opens July 8. More info at downtownfrederick.org/pitchcraft.

After receiving 28 submissions in 2018, our Pitchcraft Selection Committee was tasked with the difficult job of narrowing the pot down to four finalists. These finalists presented their ideas live, on-stage in front of an audience of more than 160 people.

The four finalists who presented during the 2018 Pitchcraft were:

When the pitches finished, the voting began. Everyone’s $20 entry fee bought them one vote to cast for their favorite project. As the votes rolled in, the room buzzed with excitement and chatter. Within 10 minutes we had our first-ever Pitchcraft winner!

Chanel Gleicher and Tiffany Saccente who pitched Frederick Bike Racks in ASL won by popular vote. But wait! Shortly after announcing our first winner, Sue Hough stood from the audience and offered to fund a second project, The Joy of Music, which was pitched by Kathaleen Lucey. Then, shortly following the event, an anonymous donor was so inspired by the community’s creativity that they funded a third project, Candylane, pitched by Patsy Dahlheimer and Marie Silverstrim.

From one event, we now have three exciting placemaking projects on the horizon for Downtown Frederick.

Want to know what’s been going on with our three winners since last October? Read about each project’s progress below.

Funding Sources: selected by attendees at the Pitchcraft event for implementation and received significant support from Shockley Honda to cover a project funding shortfall

The Joy of Music

Funding Sources: primary funding from Sue Hough who spontaneously offered private funding at the conclusion of the first Pitchcraft event, plus additional funding for cost overruns by pitcher and the pitcher’s friends and family

Want to submit an idea for our next Pitchcraft, or help pick the winning project? Find more info about Pitchcraft 2019 at downtownfrederick.org/pitchcraft.