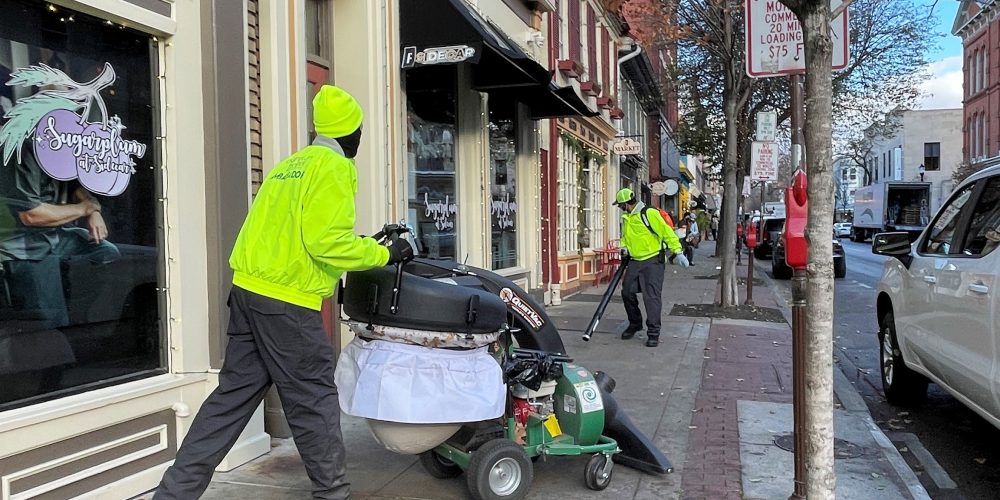 Learn More about the Ambassador Program

A soft launch of the program began on Friday, November 26 – Frosty Friday – in Downtown Frederick. As the final ambassador team members are hired and trained, full implementation will begin in December 2021.

“We are proud to be launching this program,” says Kara Norman, Executive Director of Downtown Frederick Partnership.

“The Partnership has been eager to establish an ambassador program like this, creating a dedicated workforce to keep Downtown Frederick a clean and beautiful destination for our residents and visitors, alike. Downtown Frederick has grown substantially over the past twenty years. The downtown area is now home to more than 250 independent businesses and 75+ events in any given year, which attracts a significant amount of tourism from around the world. Establishing this Ambassador Program is critical to the continued growth and success of Downtown Frederick.”

Downtown Frederick’s program will be led by Operations Manager Nigel Thomas, who joins the team with a background that includes owning a landscaping business, working in retail management and achieving certification as a nurse aide.

Nigel will oversee the ambassador team throughout the year, with a total of 4 ambassadors on staff in the cooler months and 2 additional ambassadors joining in the warmer months to address the increased number of events and foot traffic in the summer.

Together, ambassadors provide the following essential functions for Downtown Frederick:

“The need for an ambassador program was initially recognized by the Downtown Safety & Services Initiative, where it became apparent that we needed to tackle some challenges that our downtown community was facing.”

“As we balance the business and lifestyle interests that make Downtown Frederick unique, the City is excited to see this collaboration forward. Our new ambassadors will build on the work City staff do each and every day to keep Frederick clean, safe, and vibrant – they will become the new downtown experts!”

The Downtown Frederick Ambassador Program will cover more than 17 blocks of the downtown area. The Clean Team will focus on the commercial corridors of Market and Patrick Streets. The Hospitality Ambassadors will serve a broader area including Carroll Creek Linear Park, Everedy Square & Shab Row and the overall downtown area.

By establishing this program, the Partnership and City have invested in a significant amount of new equipment to support the cleanliness and safety of Downtown Frederick for years to come. These improvements include a pick-up truck, bicycles, a litter vacuum for sidewalks and rolling trash carts.

Ambassadors will provide the Partnership with data and information on a regular basis, reporting on things like how many blocks were cleaned within their coverage area, the number of bags of trash removed or the number of hospitality escorts provided. The Partnership will regularly report this data on their website at downtownfrederick.org/ambassador.

The Partnership is actively seeking additional funders to help support their work and establish the Downtown Frederick Ambassador Program as a permanent benefit for the community. To learn more about how you can get involved, reach out to mainstreet@downtownfrederick.org.

“We are pleased to support this program because Carroll Creek Linear Park and Downtown Frederick are some of the crown jewels in our community. Ensuring they’re a safe, welcoming and beautiful place for all residents and visitors is important to us.”

Marvin Ausherman, Chairman and Founder of the Ausherman Family Foundation

About Block by Block