A Christmas Carol: An Audio Experience 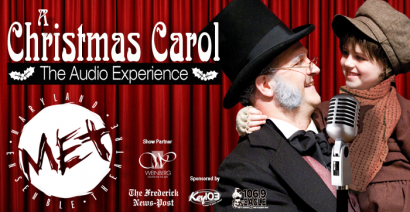 MET’s FUNCompany has long produced its own adaptation of A Christmas Carol by Charles Dickens each holiday season at the Weinberg Center for the Arts. This season, MET will offer Frederick its tradition in a brand-new way, with the release of A Christmas Carol: The Audio Experience.

Ebenezer Scrooge, a miser of the first degree, thinks Christmas is a “humbug.” When the spirits of Christmas Past, Present and Future come calling on Christmas Eve, Mr. Scrooge starts to see his life in a different light. This clever and heartwarming adaptation will delight listeners of all ages!

A hybrid between the radio drama of yesteryear, and the audiobook of today, this classic story is brought to life by a cast of 20 actors, led by MET’s Producing Artistic Director Tad Janes as Scrooge. Narration is provided by veteran broadcaster and morning show host of Today’s 97.5 in Martinsburg WV, Rona Mensah. Through this soundscape, audiences will be transported to a time when the whole family would gather around the radio to experience the defining tale of an old miser’s redemption by three spirits. The sound effects and musical underscoring sets a spark fully engaging the listener and calling them to realize the action in their own imagination.

Produced in Partnership with The Weinberg Center For The Arts

Gené Fouché as Christmas Past

Eve Evans as the Caroler