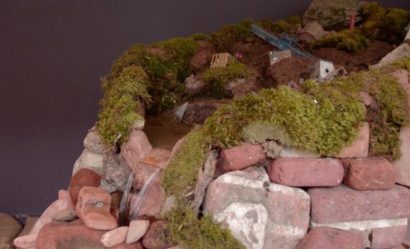 Alongside the installation’s second act opening, Ashley Hoffman will exhibit a new photography series created in conjunction with Faison’s work. The event will be held on Friday the 10th at The Frederick Arts Council’s Gallery 11 W. Patrick St. from 5-8pm. This is a free event.

Act I of Phase Change (Jan-April) explored water in its liquid form and featured a large erosion simulation which has slowly broken down over the last four months. Complimenting the interactive sculpture was a documentary exploring cultural, social, and political relationships various individuals have with water.

Moving from disaster to transformation, Act II features a four channel video opera where three millennials travel and labor to turn water into steam as they meditate on becoming. The video piece is housed in a boat, beached on a shore of brick, and surrounded by thick foliage. Scattered throughout the gallery are remnants, old journals, diary entries and other relics of a recent past.

Guests are encouraged to spend extended time in the gallery, and fully engage with the immersive experience Faison has created during his residency. Guests will have the opportunity to participate in one the titular changes of Phase Change by contributing their thoughts on Act II in written form.

“Where as Act I explored real people, their present lives, struggles, and relationships with water all under the backdrop of pending disaster,” Faison said, “Act II tells a story of more symbolic actions in a place of meditation and reevaluation. We flee from the tragedy in a deliberate manner in hopes of finding something new. Water turns to steam. I wanted to find a way to really personify becoming, something which requires both labor and patience. Similar to, but beyond a lifeboat, I see becoming as not just hope, but possibly a weapon. I’m also interested in understanding it as a multiplicity, so I’m interested to see what visitors have to add through the interactive portion.”

Artist Thomas Faison is a filmmaker and installation artist living and working in Frederick. His films have been featured in film showcases and festivals in Baltimore, Ann Arbor, Chicago, and Frederick. His installation artwork has been featured in artist run spaces throughout Baltimore and he is the co-founder of the Baltimore Student Film Showcase, now operating within the Maryland Film Festival.

Ashley Renee Hoffman is a film photographer born and raised in Frederick, Maryland. Her photographs serve as means to understand the human condition, spirituality and our relationship with Nature. Most of her work is made in the Appalachian region, exploring both the vast beauty and conflicts on an ethical and environmental level. Hoffman joined Faison as he produced the video opera, finding and photographing alternative perspectives of the event. Her work will be on display and for sale in the lobby and halls of the gallery building.

The exhibit is made possible by a grant from the National Endowment for the Arts (NEA) gallery and it is also sponsored by Market and Research Resources (M&RR). The space is provided in-kind by the Ausherman Family Foundation.