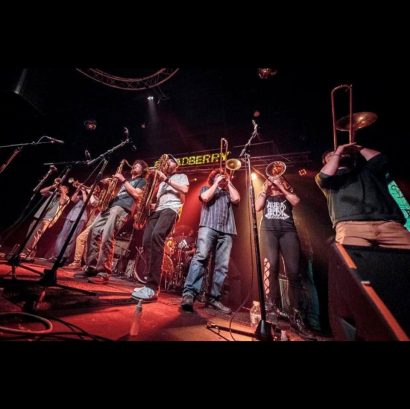 Audacity Brass Band is back on the road this fall and they have been on fire since winning the battle of the bands that is sent them to LOCKN’ Festival! You do not want to miss them while they are in Fredrick. Only at Cafe Nola!

Audacity Brass Band is a ten piece “new wave” New Orleans Style party band with a funk-fusion twist. ABB originated out of Farmville, VA and now is based out of Richmond. With all members composing, ABB’s style is influenced and includes; hip-hop, rock, blues, traditional jazz, or whatever they are feeling on stage at the moment. “We love the flair that Audacity’s style brings. Groovy, Funky, Tight, Audacity.” – Charlottesville Fan