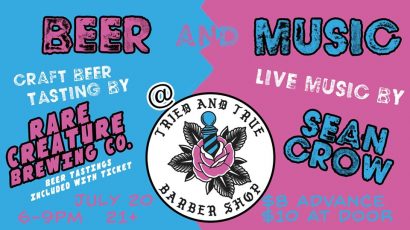 Join us for another great show at Tried and True Barbershop. We’ll have live music by Sean Crow from 6:30-8:30. Craft beers provided by Rare Creature Brewing Company from Frederick, MD (a new brewery in planning). All beers included with price of admission.

Sean Crow is a new solo acoustic act that provides a perfect blend of folk/country and blues through both original and cover songs. With soaring vocals and soothing guitar strums, Sean is an unforgettable new artist with seemingly unlimited potential.

Rare Creature Brewing Company is a new brewery in planning with hopes to soon provide new takes on the Frederick County craft beer scene. Using uncommon ingredient combinations in all styles of ales, their goal is to create Rare beers that will stand out between the all too regular craft style.