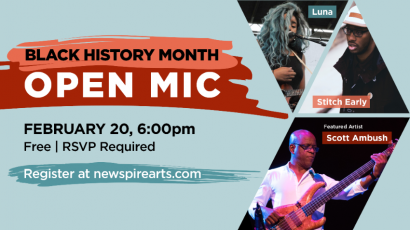 Join us in celebrating local artists in recognition of Black History Month! Opening the show is Luna Jackson, Stitch Early, and featured artist Scott Ambush from the band Spyro Gyra. Following the scheduled performances, there will be open mic performances. Have that song or poem you’ve been waiting to perform? Now’s your chance!

This event is free and open to the public, but due to limited space you are only guaranteed entry to the event if you register. People who are not registered will be admitted on a first-come first-serve basis depending on available space. Light refreshments will be served.

The event will be held at New Spire Spaces at 115 E Church St. There is free parking behind the building, which can be accessed by making a left from Church St onto Chapel Alley and then another left into the New Spire Arts lot.

Luna, represented by Raven Jackson, is a self taught singer songwriter and multi-instrumentalist who has crafted her sound into a fusion of different genres, most refer to as Experimental Pop. Luna has a love for nature, art, film, social justice, choreography, and adventuring new places. She currently resides in Frederick, MD and is working on her completing her long awaited debut album, Waves for Daze, which will release later this year. Check out her latest video here.

Stitch Early was born in Fayetteville, NC. Son to an Army soldier from Brooklyn and a Panamanian clerk, he moved around a lot; North Carolina to Germany to New York to Colorado to North Carolina to Japan and finally Frederick, MD. It was here that he honed in on his lyrical prowess and creativity. Through many years of pushing through different adversities, he was able to find a way to creatively push his faith through his music. This journey would eventually give birth to his musical style which is showcased on his debut EP ‘All Rise’ his second EP ‘The Great Compromise’. As the journey continues the bio will grow.

Born in Frederick, Scott Ambush started performing at the age of twelve. A five time Grammy nominated artist, Ambush has been the bass player for jazz/fusion band Spyro Gyra since 1992. When not playing with Spyro Gyra, Ambush fronts his own band, Funkalociraptor.