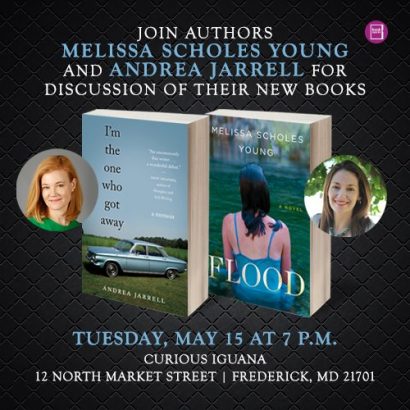 Andrea Jarrell’s work has appeared in The New York Times, The Washington Post, and many other popular and literary publications. She earned her BA in literature at Scripps College and her MFA in creative writing and literature at Bennington College. A Los Angeles native, she currently lives in suburban Washington, D.C. “I’m the One Who Got Away” is her debut memoir.

From a Starred Kirkus Review: “. . . reminiscent of Joyce Carol Oates. The work’s lasting message is that love, like Jarrell’s prose, is both painful and beautiful. A stunning series of recollections with a feminist slant.

Flood is a sparkling debut set in Mark Twain’s boyhood town, Flood is a story of what it means to be lost . . . and found.

Laura Brooks fled her hometown of Hannibal, Missouri, ten years ago after a historic flood and personal heartbreak. Now she’s returned unannounced, and her family and friends don’t know what to make of it. She says she’s just home for a brief visit and her high-school reunion, but she’s carrying too much luggage for that: literal and metaphorical. Soon Laura is embroiled in small-town affairs–the contentious divorce of her rowdy best friend Rose; the campaign of her twelve-year-old godson, Bobby, to become the town’s official Tom Sawyer; and the renewed interest of the man Laura once thought she’d marry, Sammy McGuire.

Leaving town when she was eighteen had been Laura’s only option. She feared a stifling existence in a town ruled by its past, its mythological devotion to Mark Twain, and the economic and racial divide that runs as deep as the Mississippi River. She can’t forget that fateful Fourth of July when the levees broke or the decisions that still haunt her. Now as the Mississippi rises again, a deep wound threatens to reopen, and Laura must decide if running away once more might be the best way to save herself.