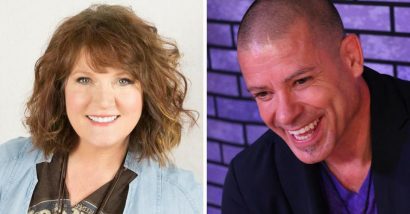 All proceeds benefit the Boys & Girls Club of Frederick County!

Come laugh with comedians Anita Renfroe and Collin Moulton as they share their humorous perspectives on the highs and lows of parenting. With Anita’s unique brand of estrogen flavored musical comedy and blend of sass, edge and slightly offbeat takes on “All Things Female,” audiences at her comedy events enjoy her William Tell version of everything a Mom says. Collin will open with his electric story-telling style: his familiarity and energy engages and relieves the audience before he even speaks.

Learn more about Anita Renfroe: It’s been a wild decade going from “stay-at-home-mom” to “YouTube comedic Phe-mom-enon”…but Renfroe doesn’t mind. With her unique brand of estrogen-flavored musical comedy and blend of sass, edge and slightly offbeat takes on “All Things Female,” audiences at her comedy concert tours, viewers of “Good Morning America” appearances, and the YouTube masses would say that Renfroe just tells it like it is. She has appeared on “Dr. Phil”, Sirius XM’s “Oprah and Friends,” CBS’s “The Early Show,” “Fox and Friends,” “Inside Edition,” Nickelodeon’s “Mom’s Night Out,” and many more. Renfroe tours with her own comedy concerts and inspirational women’s conferences where she routinely packs out venues across the United States.

Learn about Collin Moulton: Moutlton is one of the most fun, personable, and sought after headliners today. He has had his own stand-up special on Showtime, and a brand new family-friendly special on Amazon. He’s been on Nickelodeon and was recently featured on “Last Call with Carson Daly.” Touring for over 15 years, Moutltonhas gained an ease and enjoyment on stage that makes every show worth watching.