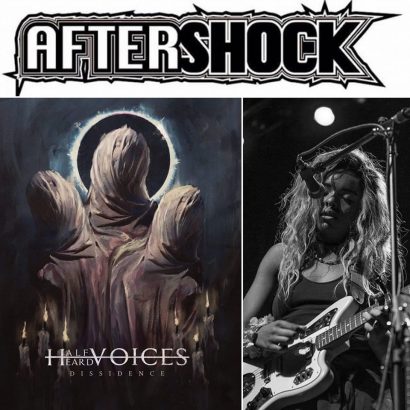 An eclectic evening of experimental pop, punk, and prog metal!

Half Heard Voices delivers progcore/metalcore/prog metal via the foursome of Dillon Baird, Zach Gunther, Jeremy Sabine, and Stefan Sandman. Their EP “Dissidence” was released in April 2019. Bassist Sandman, also an instructor at Frederick Rock-School helps mold the talents of some members of Aftershock (see below)!

Luna. is a singer, songwriter, and multi-instrumentalist from Maryland who’s powerful voice and heartfelt original music has been turning heads since 2014, with her self-released EP ‘Be Free’. She has since continued to perform and write new material, sometimes described as ‘experimental pop’, opening for such notable acts as the Violent Femmes, Scott Ambush, and Moon Taxi. She is currently working on her upcoming full length album, ‘Waves for Daze’.

Aftershock is a young foursome sprung from the Let There Be Rock School of Frederick. They recently brought their energetic punk-rock sound to Atlanta for another Rock School grand opening, and to the Frederick Food Truck Festival. Instagram: @aftershockmd

All-ages, $8 at the door, under 12 free, doors 7pm. Beer/wine available for purchase with valid government-issued ID. Cash or cards accepted.