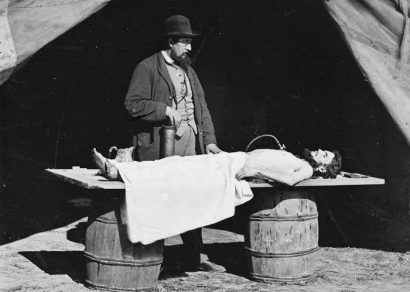 War came to Frederick in 1861 – a four year nightmare ensued.

The Civil War brought deprivations and horrors never before seen in this region. Soldiers camped on farmer’s properties, stripping them bare of food and supplies. Fighting took place in the streets, leading to damage to properties and wounded soldiers being treated in the city’s hospitals. The dead quickly filled row-upon-row at Mount Olivet Cemetery.

Join the National Museum of Civil War Medicine’s historians for the last First Saturday Downtown Frederick walking tour of 2019 on Saturday, October 5 at 3 PM. The program will focus on the worst aspects of the city’s experience during the course of the American Civil War.

Like modern warfare, the Civil War ushered in moments of horror and disaster for the citizens of Frederick, Maryland. Located at a major crossroads, the town was sure to be visited by the conflict’s cruelties. The armies soon arrived, filling the community with soldiers and filling its buildings with the sick and dying. When fighting broke out, it was often the local residents who suffered the consequences. Buildings broken, property smashed, and livelihoods lost. Not to mention the hundreds of local men off serving in the armies of North and South, many never to return.

This pay-what-you-please walking tour will unveil the true cost of war to the residents of Frederick. What did they endure? How did they move on?

Visitors will walk the same streets as Union and Confederate soldiers and hear the words of those who witnessed the chaos as the Civil War came crashing into the city.

The program will begin in the lobby of the National Museum of Civil War Medicine at 3:00 PM.

This will be a “pay-what-you-please” program. Register ahead of time to hold your spot, as space is limited.