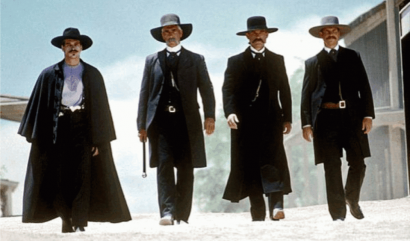 After a successful career as a lawman in the 1880s, Wyatt Earp moves to Tombstone, Arizona in the hopes of getting rich in obscurity. There, he is reunited with his brothers and his old friend Doc Holliday. Earp’s hopes for a quiet retirement are dashed when a band of outlaws called The Cowboys start causing problems in the region with various acts of random violence. The Cowboys’ climactic confrontation with Holliday and the Earps is based on real life events from the gunfight at O.K. Corral.