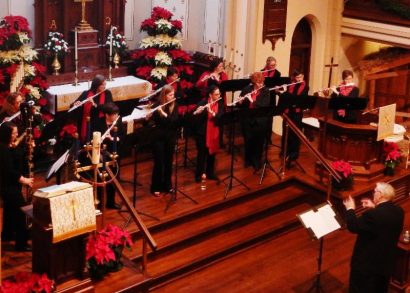 The Frederick Flute Choir is pleased to announce their 30th Season concertizing in the in the Mid-Atlantic Region. The Choir has given more than 180 performances in Maryland, Virginia, Pennsylvania and the District of Columbia. Highlights include performances at the Kennedy Center, White House, National Flute Associations National Convention and dozens of venues in and around Frederick County since 1989.

The Frederick Flute Choir will be performing in Downtown Frederick on December 26, during the Frederick Church Tour at Evangelical Lutheran Church.

The Founder and Music Director is Jennings A. Glenn. The Choir is a 501c3 Non-Profit organization. Additional information on the Choir can be found at www.FrederickFluteChoir.com or on Facebook.