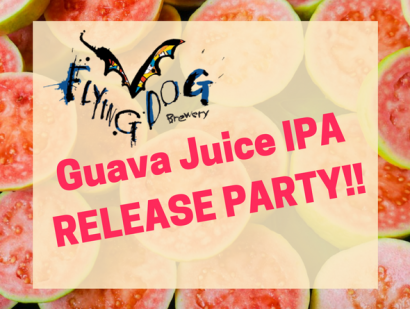 You don’t want to miss out on this Flying Dog Brewery limited release, Guava Juice IPA is going to have you feeling like you’re sippin’ brews on the beach instead of in the tap house!

Join us at JoJo’s Restaurant & Tap House 7-10pm on May 9th for the Guava Juice IPA release party! They’ll have Guava Juice and a bunch of other Flying Dog beers on tap for $1 off during the party. Or you can make it a ‘Flying Dog Flight’ by sampling all four of their brews for just $8!**Wear your best Hawaiian shirt for a chance to win some cool Flying Dog swag!**