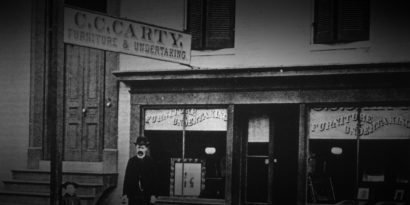 Hear ghostly tales from the past while touring the darkened galleries of the “most haunted building in Frederick” on Halloween Night.

On the creepiest evening on the calendar, tour this historic structure, exploring the building’s history as they walk through the darkened galleries and offices. Staff and volunteers will share stories of Civil War embalmers, the building’s most infamous tenants, and their first-hand accounts of paranormal activity that has given the building the reputation as being the most haunted building in Frederick. In addition to a trip through the museum galleries, the tour provides exclusive access to the third floor where numerous sightings have occurred.

48 East Patrick Street was built in the 1830s. Before it became the National Museum of Civil War Medicine, the building was a furniture shop and a site of Civil War embalming, as well as home to many Frederick residents and their businesses. The past still echoes through the halls of the building. The haunting sights, sounds, and sensations from the building have been reported for decades by the people who lived and worked in the building over many years. Join us to hear our staff and volunteer’s stories first-hand.

You are invited to bring your own cameras and ghost-finding apps – who knows what you’ll capture!  Flash photography is prohibited.

Tickets are $25 for the General Public and $20 for Museum Members. Be sure to get your tickets early since there are a limited number of spots.