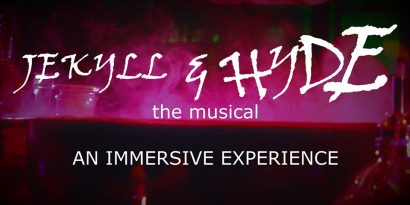 Explore the battle between good and evil as we travel through a lush score, thrilling story, and gorgeous immersive venue with a 90-minute JEKYLL & HYDE musical experience

JEKYLL & HYDE has mesmerized audiences the world over with its pop rock hits from multi-Grammy- and Tony-nominated Frank Wildhorn and double-Oscar- and Grammy-winning Leslie Bricusse. In this new production, the audience follows the action from room to room through an immersive environment of thrilling intensity.

Based on the classic story by Robert Louis Stevenson, a devoted man of science, Dr. Henry Jekyll is driven to find a chemical breakthrough that can solve some of mankind’s most challenging medical dilemmas. Rebuffed by the powers that be, he decides to make himself the subject of his own experimental treatments, accidentally unleashing his inner demons along with the man that the world would come to know as Mr. Hyde.

Originally produced in Atlantic City by Broadway on the Boardwalk, this 90-minute adaptation is edited by director Elizabeth Lucas and is being done with the permission of the writers. Free Range Humans veterans music director Marci Shegogue, lighting designer TJ Lukacsina, and sound designer Brent Tomchik return, and are joined by fight choreographer Russell Rinker.

“Director Elizabeth Lucas deftly guides her actors through a psychological drama turned musical, bringing the characters to life… a straight-ahead exceptional dramatic musical that, according to more than one theatergoer, compares favorably to the Broadway production.” – Steve Angelucci, Atlantic City Weekly