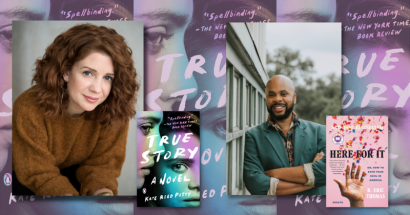 Join us as we celebrate the paperback release of True Story by Kate Reed Petty! Kate will be in conversation with R. Eric Thomas, author of Here For It, on Thursday, August 5 at 7 pm on Crowdcast. This event is free but registration is required.

An inventive and breathtaking exploration of a woman finding her voice in the wake of trauma, True Story is part psychological thriller, part fever dream, and part timely comment on sexual assault, power, and the very nature of truth. Ingeniously constructed and full of twists and turns that will keep you guessing until the final pages, it marks the debut of a singular and daring new voice in fiction.

Kate Reed Petty has been recognized with a Narrative magazine 30 Below Award, as well as grants and scholarships from the Robert Deutsch Foundation, The Mount, Bloedel Reserve, and the Sewanee Writers Conference. Her short fiction has been published in Electric Literature, American Short Fiction, Blackbird, Ambit, Nat. Brut, and Los Angeles Review of Books, and she has a master of letters from the University of St. Andrews in Scotland. She lives in Baltimore.

R. Eric Thomas is a bestselling author, playwright, and screenwriter. His books include Here for It: Or, How to Save Your Soul in America, which was featured as a Read with Jenna Book Club Pick on NBC’s Today, and Reclaiming Her Time: The Power of Maxine Waters, co-authored with Helena Andrews-Dyer. For four years, he wrote “Eric Reads the News,” a wildly popular daily humor column covering pop culture and politics for Elle online. Eric is the winner of the Barrymore Award for Best New Play and the Dramatist Guild Lanford Wilson Award, and was a finalist for the Steinberg/ATCA New Play Award. He has written for the Peabody Award–winning streaming series Dickinson and Better Things on FX. Off the page, Eric is also the long-running host of The Moth StorySlams in Philadelphia and Washington, D.C., and has been heard multiple times on The Moth Radio Hour, NPR’s All Things Considered, and It’s Been A Minute with Sam Sanders. He lives in Maryland with his extraordinary husband, the Reverend David Norse Thomas.