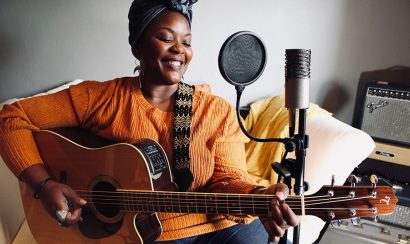 Originally from South Carolina, Kyshona has been resident in Nashville since 2014. Her songwriting skills and powerful, emotional voice are demonstrated on her latest two albums ‘Go‘ and ‘The Ride’. Kyshona was recently named one of the Top 5 Roots Artists to watch by CMT Edge (country music television) been featured on NPR’s “World Cafe Live” and network television shows “Conviction” and “Criminal Minds”.

“Kyshona Armstrong has been called upon to represent for soul and gospel in roots, rock and folk lineups and to bring singer-songwriter sensibilities to R&B bills. But wherever she plants her feet, she does so with righteous conviction and a strong sense of her own voice.”- NPR Music

“Kyshona effortlessly grooves between roots, R&B and folk music. On ‘Fear’…she digs deep into a swampy hook that dredges the depths of our subconscious. While the song explores all of the ways we tell ourselves what we can’t do, Kyshona imbues it with the determination needed to free ourselves from our doubts.” – The Boot