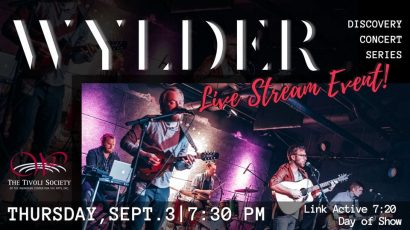 The Tivoli Discovery Series presents Wylder, in a live stream, full production concert experience on Facebook! The Discovery Series brings emerging artists to Frederick that are on the rise and starting to receive national attention.

Wylder is an indie-rock quartet from the heart of Virginia. Founded by songwriter Will McCarry (vocals, guitar) in 2012, the band’s lineup also includes Lonnie Southall (guitar/mandolin), Mike Pingley (drums), and Jackson Wright (bass/piano). Wylder’s sprawling and ambitious releases include Rain and Laura (2016) and Golden Age Thinking (2019)—records that embrace their enigmatic but unmistakable brand of energetic and lyrically-driven indie-rock.

Wylder has been heard on NPR, PBS, MTV and Voices of America. Their 2018 appearance on Pat Monahan’s Sirius XM program Train Tracks kicked off a successful run on AAA stations across the country in 2018, and in 2019, they reached an even larger audience when the track “At the End pt. 1” was featured during a key moment on the hit ABC series The Good Doctor. They have performed aboard alongside an array of artists including Barenaked Ladies, Vanessa Carlton, Jukebox the Ghost, and Colony House.
Wylder’s new single “Kings of Summer” is out 8.28.20 ahead of an upcoming EP.

Tune in with your friends and family for a Facebook Watch Party on Sept 3rd! A special thanks goes out to Showtime Sound LLC for making this possible!

Admittance to in-person Discovery concerts is always a pay-what-you-want donation at the door. During the live stream donations will be accepted.