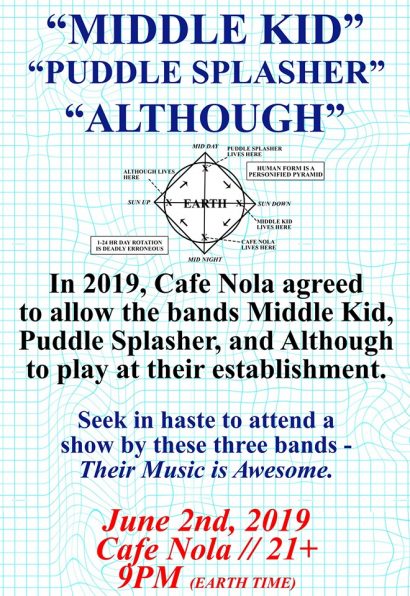 ACCORDING TO THE TIMECUBE, THREE BANDS WILL SIMULTANEOUSLY CONVERGE ONTO CAFE NOLA ON SUNDAY, JUNE 2ND.

Middle Kid began as the acoustic solo project of Zack Willis. Using the project as an outlet for his indulgent, self-aware lyrics and catchy melodies, he recorded his debut EP “Whiner” in March 2015 in his mom’s kitchen. Since then, he has readapted his songs from acoustic to electric in an attempt to create a more ethereal sound, but with crushing waves of dynamic shifts. Now, Middle Kid is the full band project of Zack (Guitar/Vocals), Evan Braswell (Bass), and Matt Henry (Drums), reminiscent of bands like Foxing, Cursive, and Mansions.

Listen to Although, Puddle Splasher, and Middle Kid