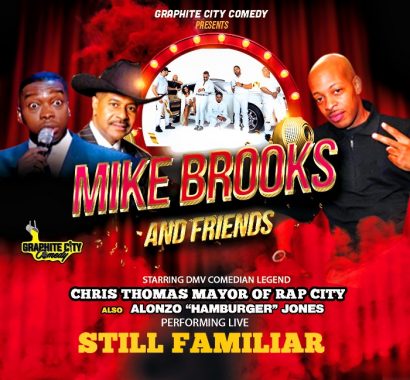 Come out for a Night of Elegance with DMV comic legend Mike Brooks & some of his hilarious celebrity comedy friends, including BET’s mayor of Rap City, Chris Thomas and Alonzo Hamburger Jones. Then relax to the grown & sexy sounds of Still Familiar. Then relax to the grown & sexy sounds of Still Familiar.  Mike Brooks has appeared on HBO’s Def Comedy Jam and Bad Boys of Comedy, as well as BET’s Comic View and One Mic Stand.  Brooks also appeared in the movie The Salon and produces the popular YouTube series Benning Road HouseWives. Come see why the comedian who’s opened for everyone from Dave Chappelle and Bernie Mac to Monique and Patti Labelle is being called “the next Martin Lawrence” thanks to his hilarious and on-the-mark routine.