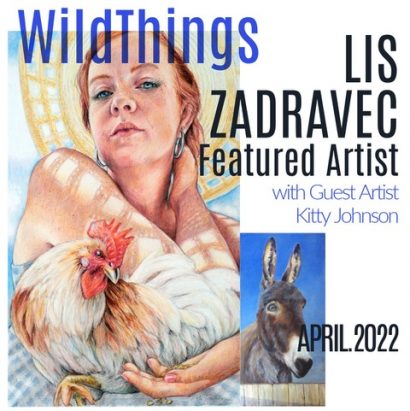 Lis Zadravec’s extraordinary and inspirational artwork, created primarily in colored pencil, expresses poignant humanity. Lis is known for using her lyrical narratives of girls, women and animals to show the triumphant spirit we all possess. Her subjects reveal their strength as well as their vulnerabilities, but are never victims. They are the very essence of hopefulness and possibility. Lis often uses animals to express these human emotions and character traits. Life itself being a formula of struggle vs. potential, Ms. Zadravec’s artistic achievements have been many and inevitable. Lis asserts that you should be known for what you do and what you are made of. The artist’s innate skills and style are reminiscent of the masterful work of illustrators and painters of generations past. She demonstrates an uncanny ability to master her medium. This is work that begs for proof that it is not painted. Her artwork is internationally recognized and published. She is a signature member of the Colored Pencil Society of America and faculty member at the Yellow Barn Studio in Glen Echo Park, MD.

Kitty Johnson grew up in the tidewater area of Virginia where her appreciation of everything natural began. Life on the edge-water instilled a contemplative perspective from which to view and interpret nature that has influenced her art throughout her life. As a long-time resident of Loudoun County, her keen eye turned to the bucolic rolling hills, as well as the domestic and wild animals in her rural surroundings. Her art visually reflects a natural purity that is often missed in the day to day frenetic pace that now drives the Loudoun lifestyle. Kitty’s passion for animals leads her to look deeply into the individuality of each animal she photographs to reveal emotive scenes. Her art captures the distinct presence that exists behind the eyes of each animal she paints. “Many of the animals I photograph and paint have their own personality, charm and even humor…My hope is to share that personality with the viewer.” – Kitty Johnson