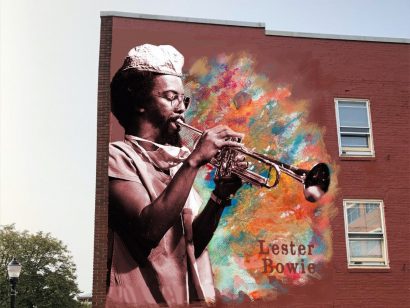 The Frederick Arts Council announces the commission of a new mural which will appear at 69 S. Market Street in Downtown Frederick. The mural, designed and painted by artist Rafael Blanco, will feature jazz great and Frederick native Lester Bowie.

The artist will be available at the mural on Dec. 5 from 1-4 along with Frederick Jazz Festival performers (1-3pm) and the Eric Byrd trio (3-5pm).

Bowie, born in 1941 in Frederick County, grew up in St. Louis and began studying trumpet with his father as a boy. He was a cofounder of St. Louis’s Black Artists Group, and would go on to co-found the Art Ensemble of Chicago. An adventurous player, he explored the connection between jazz and other forms of popular music, and was famous for performing in a white lab coat, indicating he was researcher of jazz and the stage was his laboratory.

Mural artist Rafael Blanco is a native of Alicante, Spain, and his artistic practice focuses on identity and human expression. Trained as a classical painter, he has transitioned into large-scale public art. He has exhibited internationally and holds an MFA from the University of Nevada; he is currently an assistant professor at Elmhurst University in the Chicago area.

“We are delighted to be working with Rafael to bring greater visibility to this important figure from Frederick,” said Louise Kennelly, Executive Director of the Frederick Arts Council. “Frederick County’s Public Art Master Plan was created in order to place more joyful, artistically excellent, and diverse works like this one.”

Blanco’s work was selected from a pool of competitive applications vetted by a curatorial committee, in response to a nationally circulated RFP. Blanco will begin work on the mural on Sunday, November 22nd, and finish in time for a December 5th open-air celebration surrounding the mural featuring live jazz.

The mural is supported by the Ausherman Family Foundation.