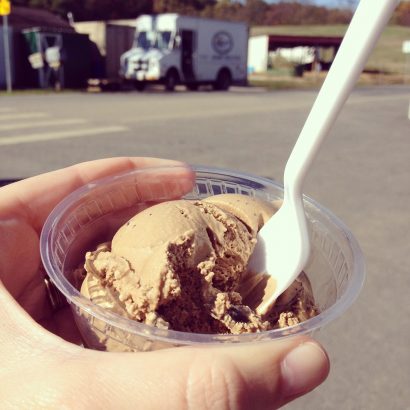 South Mountain Creamery will release Frederick’s official ice cream flavor at their restaurant, Hometown Harvest Kitchen, on Tuesday, July 30 at 2:00pm. The flavor has been created with Frederick’s history and heritage in mind and will pay tribute to some of it’s most influential figures. The kickoff event is open to the public and will feature free samples of the new flavor.

Members of the public are invited to sample the new flavor and submit the name they think best suits the ice cream. A naming contest will run through the month of August with a name being announced during the Great Frederick Fair, where the flavor will be available to purchase. Name submissions will be collected online starting on Tuesday. The ice cream will be available to sample and purchase at Hometown Harvest Kitchen and in other locations throughout the County.

In addition to the new flavor, Frederick ice cream flights will debut on Tuesday. The flights will feature several flavors created with Frederick County in mind including the new flavor as well as the popular Snallygaster, named for Middletown’s favorite mythical creature. These new flights will be the best way for customers to sample all of the flavors that best represent the Frederick area.

Join us for a delicious kickoff party on Tuesday at 2:00pm!