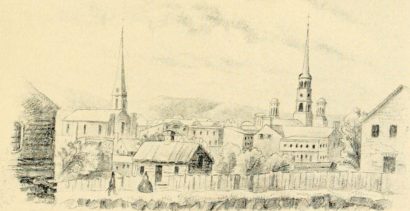 Join historian John Lustrea for a First Saturday walking tour of Downtown Frederick focused on the city’s role as a makeshift hospital in the final months of 1862. The tour will take place on Saturday, May 5, 2018 at 3:00 PM. This will be a “pay-what-you-please” program. In September 1862, a newspaper correspondent from the Philadelphia Inquirer referred to Frederick as “one vast hospital.” In the aftermath of America’s bloodiest day at Antietam on September 17, 1862, thousands of wounded soldiers, Union and Confederate, were brought to make-shift hospital wards in Frederick’s churches, schools, hotels, and private homes. The “City of Clustered Spires” received more than 8,000 patients from the battlefields in Maryland.

Historian John Lustrea will lead a guided tour to numerous locations that were used as hospitals during this chaotic time in the city’s history. This will be a “pay-what-you-please” program. Early registration is encouraged.