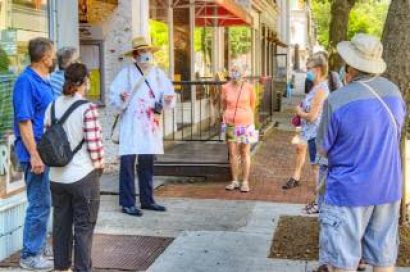 Join NMCWM docent Brad Stone for a walking tour of Downtown Frederick focused on the city’s role as a makeshift hospital in the final months of 1862 every Sunday this September at 2:00 PM. The walking tour is limited to 12 participants. Masks are required throughout the tour and we request that you practice strict social distancing. Tickets are $15 and include admission to the National Museum of Civil War Medicine in addition to the walking tour. Tickets are free for Museum members, but you must still reserve your spot. Reservations will be accepted on a first come first served basis. Click below to buy your ticket today.

In September 1862, a newspaper correspondent from the Philadelphia Inquirer referred to Frederick as “one vast hospital.” In the aftermath of America’s bloodiest day at Antietam on September 17, 1862, over 8,000 wounded soldiers, Union and Confederate, were brought to make-shift hospital wards in Frederick’s churches, schools, hotels, and private homes. From the diaries and letters of the surgeons, soldiers, and civilians who were there, this guided walking tour will explore the locations of the city’s Civil War hospitals in churches, schools, and public buildings. Many of those same buildings still make up the historic district today.