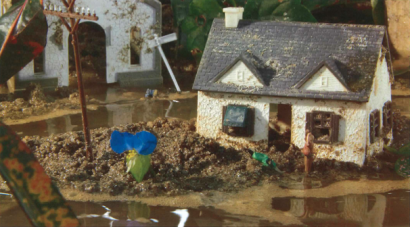 This new installation, funded by the National Endowment for the Arts at FAC’s pop-up gallery, will make use of a variety of media from video art, sculpture, music, and more to explore questions surrounding climate change, cultural relationships with water, disasters, transformation, and how to survive.

Artist Thomas Faison is a filmmaker and installation artist living and working in Baltimore, though he is a Frederick native. He returned in early 2018 for a solo show, entitled “Unified Dissonance,” at the Blue Elephant Gallery in the Griffin Art Center, and his films have been featured in film showcases and festivals in Baltimore, Ann Arbor, Chicago, and Frederick. His installation artwork has been featured in artist run spaces throughout Baltimore and he is the co-founder of the Baltimore Student Film Showcase, now operating within the Maryland Film Festival.