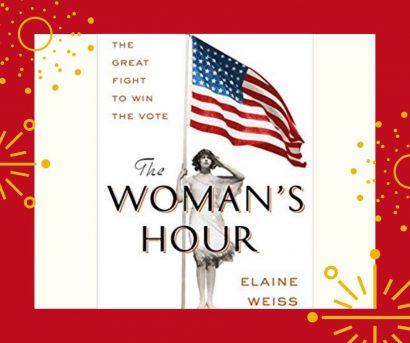 Join Heritage Frederick on March 12 at 7pm at Frederick’s City Hall in honoring the 100th anniversary of the Women’s Suffrage with award winning journalist and author Elaine Weiss as she discusses her latest book the The Woman’s Hour. The book covers the story and struggle women had to face to obtain the right to vote. The Woman’s Hour will be available for purchase at the event. Elaine Weiss has been recognized with prizes from the Society of Professional Journalists, and her by-line has appeared in The Atlantic, Harper’s, New York Times, Boston Globe, Philadelphia Inquirer, as well as reports and documentaries for National Public Radio and Voice of America. Her long-form writing garnered a Pushcart Prize “Editor’s Choice” award, and she is a proud MacDowell Colony Fellow. Her first book, Fruits of Victory:The Woman’s Land Army in the Great War was excerpted in Smithsonian Magazine online and featured on C-Span and public radio stations nationwide.

PLEASE NOTE: This event is FREE

“At the heart of democracy lies the ballot box, and Elaine Weiss’s unforgettable book tells the story of the female leaders who—in the face of towering economic, racial, and political opposition—fought for and won American women’s right to vote. Unfolding over six weeks in the summer of 1920, The Woman’s Hour is both a page-turning drama and an inspiration for everyone, young and old, male and female, in these perilous times. So much could have gone wrong, but these American women would not take no for an answer: their triumph is our legacy to guard and emulate.”
—Hillary Rodham Clinton

Thank You to our Sponsors: Curious Iguana and League of Women Voters

The P. Newman Lecture honors the civic leadership of Parsons Newman. The lecture is made possible through the generosity of Mr. and Mrs. John D. Hendrickson II, who created the Parsons Newman Memorial Fund at The Community Foundation of Frederick County