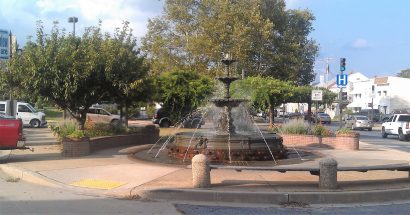 You are invited to attend a community meeting where a final draft of ideas to improve the Seventh Street Fountain Park will be presented for community feedback. The meeting will be held on Thursday, April 25 from 7:00PM to 8:15PM at the Bernard W Brown Community Center.

Advance registration is encouraged. The meeting is free and open to the public. Feel free to pass along this invitation to anyone who might be interested in attending.

The draft designs presented at this meeting were made possible thanks to funding by the Ausherman Family Foundation. During the meeting, the draft park designs will be presented by consultants from Mahan Rykiel, a full service landscape architecture, urban design and planning firm.

In April 2013, Downtown Frederick Partnership organized a workshop, made possible due to financial support from Main Street Maryland, to seek feedback from the community on ways to improve the Seventh Street Fountain Park. This meeting resulted in variety of concepts for improving the park space. You can view the 2013 Concept Package for the Seventh Street Fountain Park at downtownfrederick.org/emerging-projects.

Since 2013, the Partnership has continued to seek funding to make the envisioned improvements a reality. In the past year, the City of Frederick included the repair of the Seventh Street Fountain in the City’s Capital Improvement Program (CIP). Inclusion in the CIP will help to address the significant maintenance issues experienced by the fountain itself.

With City investment now in the relatively near term, the Partnership sought funding to move from the 2013 concepts to documents that can be used to construct the improvements envisioned beyond the fountain itself. In this process, the team has learned that the significant underground public infrastructure (water, sewer, electric, etc) within the park space make moving the fountain closer to Seventh Street infeasible. As a result, enhancing the park space, while keeping the fountain in its current location, became the focus of developing a new design. This new design will be reviewed at the April 25th community meeting where the public is invited to offer their feedback.

MORE ABOUT THE PARTNERSHIP

Founded in 1990 as a 501(c) 3 nonprofit organization, Downtown Frederick Partnership works to enhance, promote and preserve the vitality and economic viability of Downtown Frederick by implementing the national Main Street Program for the benefit of Frederick businesses, residents and visitors.

Working with business and community leaders, the Partnership oversees the work of four active committees including: the Business Development Committee which works to support existing businesses and recruit new businesses where necessary, the Design Committee which focuses on the downtown streetscape, policy advocacy and long-term planning, the Organization Committee which raises funds as well as recruits and thanks volunteers and the Promotion Committee which promotes, programs and brands Downtown Frederick.