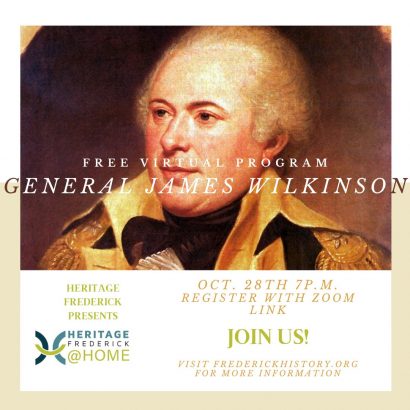 Frederick Town, as the City of Frederick was once called, was the site of the trial of the highest-ranking federal official ever accused of being a spy for a foreign power. In 1811, General James Wilkinson, commanding general of the US Army, was court-martialed for being a spy for the Spanish government. Wilkinson was also accused of aiding Aaron Burr in treason against the United States, as well as causing the death of over one quarter of the entire American army, through incompetence and neglect. Wilkinson and the spy trial will be the focus of a virtual program hosted by Heritage Frederick on October 28th at 7:00 p.m.

The talk with be presented by Howard W. Cox, a resident of Frederick who is working on a biography of Wilkinson. Cox retired in Frederick after a 40-year career with the federal government. He served as a trial attorney with the US Army Judge Advocate General’s Corps, a federal prosecutor with the Department of Justice, and a member of the Senior Intelligence Service of the Central Intelligence Agency.

Learn why Wilkinson was tried in Frederick, and how, with the assistance of Roger Taney, he avoided being convicted of his crimes. The lecture is free and open to the public, but pre-registration is required. Register here. This program is part of the new Heritage Frederick At Home series, launched by the organization in order to provide virtual programming that bridges the past to the future. This program is supported in part by FCB Bank.