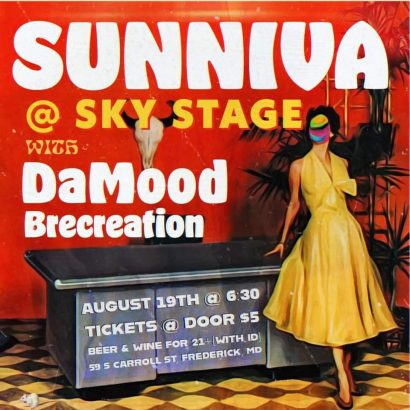 Join us for another evening of live original tunes under the stars with popular genre-bending jam band Sunniva!

Sunniva makes indie-alternative-world music-psychedelic-progressive-rock. What the what? Just come to Sky Stage and hear for yourself! Sunniva is comprised of songwriter Danniel B. Knight on vocals and guitar and his brother Conner Knight on bass, Patrick Harman on drums, and Colin Shultzaberger on keys.

Frederick based daMOOD is a talented group of musicians with backgrounds in hip-hop, electronic, rock & bluegrass. They formed as a backup band for Maryland rapper Retro/Ricole and created a unique style of music. After only three months of rehearsals the group broke barriers by becoming one of the first hip hop bands to perform at Frederick’s premier venue The Weinberg Center. Since then; they have played in Shepherdstown, WV, Baltimore, MD and even opened for hip hop legends The Pharcyde.

Brecreation (pronounced brec-reation) is a rap artist and DJ from the DMV who will perform some works from his latest album Dark but Vibrant.

Tickets at the Gate