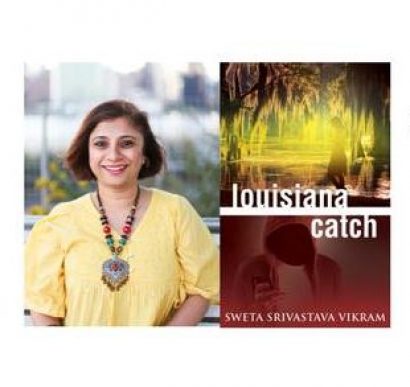 About Louisiana Catch:
In Louisiana Catch, a grieving daughter and abuse survivor must summon the courage to run a feminist conference, trust a man she meets over the internet, and escape a catfishing stalker to find her power.

About Sweta:
Sweta Srivastava Vikram (www.swetavikram.com), featured by Asian Fusion as “one of the most influential Asians of our time,” is a best-selling author of 12 books, five-times Pushcart Prize nominee, mindfulness writing coach, social issues advocate, and a certified yoga & Ayurveda counselor who helps people lead creative, productive, and healthier lives. Louisiana Catch (Modern History Press 2018) is her debut U.S. novel and featured on U.K.’s list of “Books to Read in 2018.” Born in India, Sweta spent her formative years between the Indian Himalayas, North Africa, and the United States collecting and sharing stories. She writes about women, multiculturalism, wellness, and identity. Sweta, whose work has appeared in The New York Times, amongst other publications, across nine countries on three continents, is an award-winning writer and graduate of Columbia University. She lives in New York City with her husband and in her spare time, teaches yoga to female survivors of rape and domestic violence. You can find her in these online spaces: Twitter (@swetavikram), Instagram (@swetavikram), and Facebook (http://www.facebook.com/Words.By.Sweta)