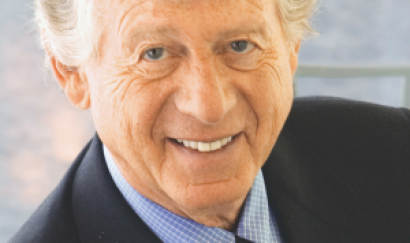 During more than 50 years that he has worked as a professional journalist, Ted Koppel has embodied the term “eyewitness to history.” He covered John F. Kennedy’s funeral in 1963, Barry Goldwater’s presidential campaign in 1964, and Martin Luther King Jr.’s civil rights march from Selma to Montgomery, Alabama in 1965. Koppel also covered a succession of ten conflicts as an ABC News war correspondent, beginning with Viet Nam, Laos and Cambodia in 1967, 1969, 1970 and 1971 and finally as an embedded correspondent with the 3rd armored infantry division during the invasion of Iraq in 2003.

He covered Richard Nixon’s presidential campaign in 1968 and historic visit to the People’s Republic of China in 1972, and Henry Kissinger’s shuttle diplomacy in the Middle East in 1973 and 1974. Koppel was with Mikhail Ghorbachev inside the Kremlin on the last day of the Soviet Union and was the first journalist to interview Nelson Mandela at his home in Suweto, South Africa upon his release from 27 years in prison.

Over the course of 26 years as anchor and managing editor of “Nightline,” Koppel became the longest serving news anchor in U.S. broadcast history. After leaving ABC in 2005, Koppel and his colleagues produced 20 hours of documentaries for the Discovery Network, where he served as managing editor. Since then, he has worked as a contributing analyst for BBC America and a special correspondent for the NBC News magazine program, “Rock Center.”

In 2012, New York University named Koppel one of the “100 outstanding journalists in the United States in the last 100 years. When he left ABC News after 42 years, he was the most honored reporter in that network’s history, having received more Overseas Press Club awards than the previous record holder, Edward R. Murrow, and eight George Foster Peabody awards. Television’s equivalent to the Pulitzer Prize is the Columbia-DuPont award; Koppel has won 12. He has also been awarded 42 Emmys, including one for lifetime achievement.

Koppel’s most recent book “Lights Out,” a 2015 New York Times bestseller, examines a threat unique to our time and evaluates potential ways for America to prepare for a cyber-catastrophe. Koppel serves as commentator and non-fiction book reviewer for the National Public Radio. He is also a contributing columnist to The New York Times, The Wall Street Journal, and The Washington Post. As of February 2016, Koppel has undertaken a new assignment for CBS News as Senior Contributor to “The CBS Sunday Morning Show.”