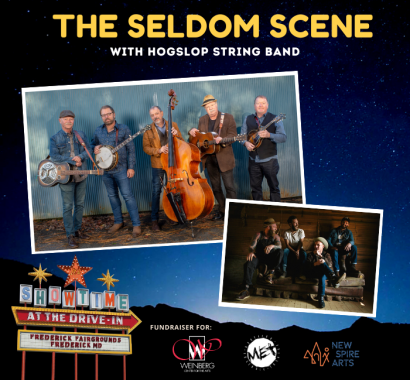 The Weinberg Center for the Arts, Maryland Ensemble Theatre and New Spire Arts have joined forces to produce a family friendly fundraising event to support the arts in Frederick. This concert, part of Showtime at the Drive-In at the Frederick Fairgrounds, features two great bluegrass bands who will provide fans the opportunity to whoop and holler in a safe and socially distanced environment.

THE SELDOM SCENE
Since forming nearly 50 years ago in Bethesda Maryland, The Seldom Scene have brought both freewheeling joy and immaculate musicianship to their inventive take on bluegrass, offering up spirited interpretations of songs from limitless genres. They have been instrumental in starting the progressive bluegrass movement with shows that include bluegrass versions of country music, rock and even pop.

HOGSLOP STRING BAND
Based out of Nashville, Hogslop String Band creates & performs cross-genre music that pushes the boundaries of what Old Time music could/should be, blending country, psych, and astounding stamina for an energetic performance.

Price is per car and includes up to 4 people.