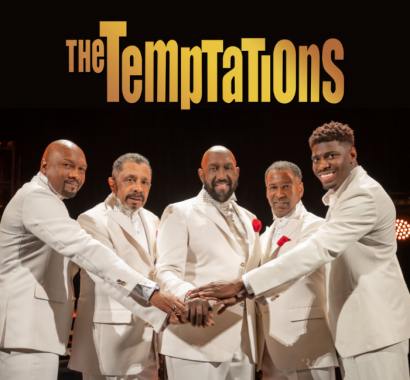 The Temptations, often referred to as “American Music Royalty,” are world-renowned superstars of entertainment, revered for their phenomenal catalog of music and prolific career.  Named the “#1 R&B/Hip Hop Artists of All Time” and one of the “125 Greatest of All Time Artists” by Billboard magazine, as well as one of the “100 Greatest Artists of All Time” by Rolling Stone Magazine, the group is truly a beloved national treasure.  The Temptations’ heritage, influence and contributions to, not only American culture and African American communities but also to the global music landscape, are monumental.

The influence that the Temptations have had on mainstream and global artists is undeniable.  The group’s popularity is ever-increasing and they are one of the most iconic, bestselling brands in the entertainment world today. Their story is a road map through American history. What began in Detroit, when a remarkable combination of soulful voices united, was the genesis of an epic journey that introduced multiple superstars to the world and produced some of the greatest music of our era. While the group has evolved over the years, Dr. Otis Williams has continued to lead the group and carry the torch forward for the next generation of Temptations’ fans.

Dr. Otis Williams, the sole surviving original Temptation, Ron Tyson, a lead vocalist with the group for 37 years, Terry Weeks, a lead vocalist for 23 years, Willie Greene, Jr., bass vocalist with the group for four years, and Mario Corbino, who joined the group this year, always look forward to serenading fans with their soulful voices, lighting up stages with their famous Temptations’ Walk, and bringing joy to audiences of all ages.