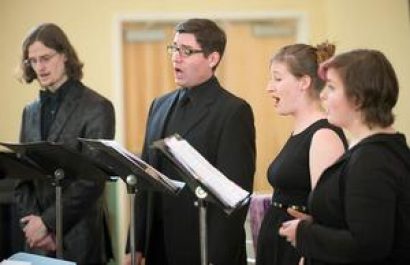 On Saturday, April 23 at 7:00pm at Frederick Presbyterian Church, the acclaimed vocal consort Third Practice presents When I am alone, an intimate program of personal, confessional songs spanning the centuries. Samuel Barber’s Hermit Songs and Reincarnations serve as a bridge between the plaintive strains of John Dowland’s lute songs and reimaginings of works by Fiona Apple and Janelle Monáe.

Founded in 2012, has won plaudits from major US publications for their “evocative heavy lifting” (The Washington Post) and “first-rate” musicality (The New York Times), as well as premiered works by John Tavener, Tawnie Olson, and many other noted composers, performing in venues such as Dunbarton Oaks, the National Gallery of Art, and the Castleton Festival.