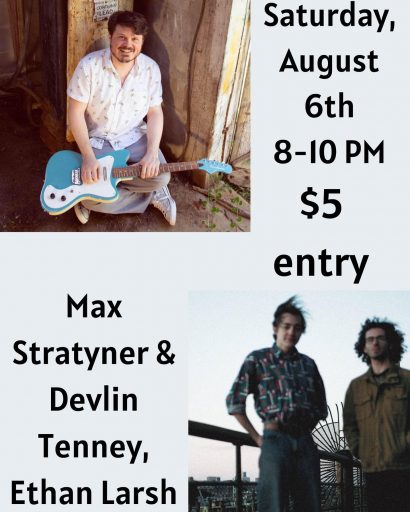 Live music under the stars! Frederick native Max Stratyner, now based in Brooklyn, teamed up with Devlin Tenney to create acoustic indie-folk tunes reminiscent of Elliott Smith or Simon & Garfunkel. When not playing as a duo, both are members of the 4-piece band Lunchweather, and students at The School of Jazz & Contemporary Music at The New School, NYC.

Ethan Larsh hails from central Pennsylvania. He composes songs blending indie rock, power pop, garage and psych-experimental elements, performing with a band or as a soloist. Glide Magazine described Larsh’s music as “some parts Lennon/McCartney, other parts Wilco and White Stripes, and then even Flaming Lips…”

Tickets Available at the Door