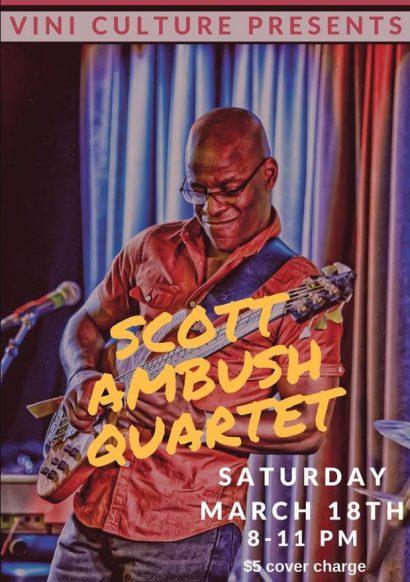 Come out and enjoy the Scott Ambush Quartet! There is a $5 cover charge.

Five time Grammy nominated bassist, composer and luthier, Scott Ambush has been performing since the age of twelve. A native Marylander, Scott began playing electric bass when he discovered that the drum slot in the band he wanted to join was filled. Scott has no regrets. As a member of contemporary jazz super group, Spyro Gyra, he is known for his versatility, sensitivity and lyrical playing. Scott is equally at home in a wide range of musical contexts, having played with such luminaries as Stanley Turrentine, Dizzy Gillespie, Omar Hakim and Special EFX. He has backed R&B jazz instrumentalists, Chuck Loeb, Kirk Whalum, and Pieces of a Dream, among others; R&B vocalists Maysa Leak and Angela Bofil, as well as award winning Blues artist Deanna Bogart. Whether doing live dates or recording projects with Bogart, Jason Miles, Teresa DeSio (Italy), Misato Watanabe (Japan) or renowned Bollywood composer and producer, Sandeep Chowta, Scott’s varied experiences have served him well. When not touring with Spyro Gyra, Scott fronts his own group,
Funkalociraptor! and designs, builds and sells the custom bass guitars that carry his name.