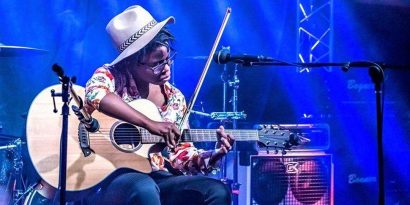 Live with limited capacity* from the open-air Sky Stage. Fingerstyle guitarist and composer Yasmin Williams hails from Woodbridge, Virginia. Her music has been described as unorthodox, modern, refreshing, relaxing, and unique and has been called some of the most imaginative guitar music out today. She utilizes various techniques including alternate tunings, percussive hits, and lap tapping to great effect. Williams was to debut at the famous SXSW festival this year before it was sadly cancelled due to the pandemic. Very recently, her NPR Tiny Desk Contest entry was picked as a favorite by Brittany Howard of the Alabama Shakes on a program with NPR’s Bob Boilen, and she was featured on New Sounds’ “Soundcheck” podcast.

‘Williams’s music transcends the standard idea of what a guitarist should do.’ – NPR Music

*Masks required for ages 5+. Under 12 free. Beer/wine available for purchase for 21+ with valid ID.