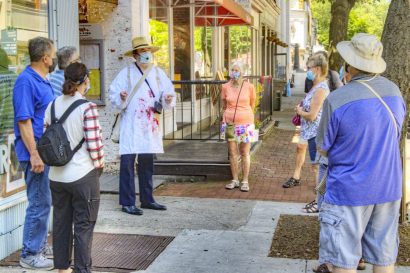 Walk in the footsteps of doctors, nurses, soldiers and civilians who cared for 8,000 wounded soldiers in Downtown Frederick

Every Saturday and Sunday at 2:00 PM from April until October, docents from the National Museum of Civil War Medicine will explain how Frederick became “One Vast Hospital.” Arguably the most trying moment in city’s history came after the Battle of Antietam in the fall of 1862. The town’s population doubled when 8,000 wounded soldiers were delivered by ambulance to make-shift hospitals throughout Frederick.

Initially the walking tours will be limited to 12 participants. Masks are required throughout the tour and we request that you practice strict social distancing. Tickets are $15 and include admission to the National Museum of Civil War Medicine in addition to the walking tour. Tickets are free for Museum members, but you must still reserve your spot. Reservations will be accepted on a first come first served basis.

With accounts taken from the diaries and letters of the surgeons, soldiers, and civilians who were there, this guided walking tour will explore the locations of the city’s Civil War hospitals in churches, schools, and public buildings. This program is an excellent way to take in downtown Frederick as many of those same buildings still make up the historic district today.

Throughout the American Civil War, Frederick, Maryland played a vital role to both Union and Confederate armies. Soldiers marched beneath the “Clustered Spires” on their way to battles at Antietam, Gettysburg, and Monocacy. The “One Vast Hospital” tour focuses on the wreckage left behind.